This article seeks to introduce you to Chris Auret, a 29-year-old artist and maker currently staying near Rheenendal, Western Cape.

In August 2016, Chris, while in the process of looking for 'ways to be a better human being' and ways to move out of the city into a more rural area, discovered a plot of land that was for sale and decided to 'put the ball in the universe's court'. By September, he teamed up with his close friend, Cassandra Hellberg to start a crowdfunding campaign, 1000 Prints No Footprints. It ended up being successful in raising just over R1 million (US $72,750) in order to buy the 11-hectare plot of land just northwest of Knysna in the Western Cape, near to the town of Rheenendal. In Chris's words - "everything happened rather quickly" - as the land was funded by November 21st! He says, "Normally with crowdfunding campaigns you need a plan... we just launched the video and planned from that point onwards!"

Chris's involvement as an artist was critical to the success of the campaign. In the way the campaign was set up, art prints were used as rewards for donations to the campaign. Chris's own personal artworks, including photographs, explore nature, our place within it as human beings, and his frustrations and observations of the wrongs and rights that we as humans act out in city environments and outside of the city. Within this work lies Chris's reasons for a 'leap into the forest', or a transition into rural living. 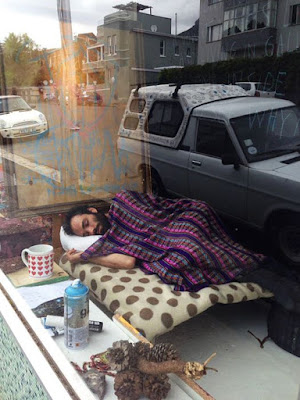 People could also contribute to the campaign by sending in artwork to a gallery that Chris was using at the time of the campaign. In this way, the gallery became a metaphor for the land itself. They hosted yoga, group meditations, environmental talks and documentary screenings, short film nights, live music and poetry.

During the actual crowdfunding campaign, Chris did something quite unique - he took a vow of silence and lived in the gallery window for ten days!

In his words, the idea was to focus peoples' energy by not speaking. As a result, he observed a difference in the way people interacted with the art in the gallery.

Since people were unable to ask him questions, it resulted in the people engaging more closely with the art in the gallery.

People then used body language more to communicate, which allowed him to see into peoples' eyes, feel their hearts and be a 'mirror' for them.

During one of his days of silence, he also meditated for nine hours, which resulted in some interesting expressions from people as they walked past, taking pictures. He recorded the experience with a Go-Pro camera, while deep in meditation and oblivious to what was going on outside.

Along with the public donations that helped to fund the purchase of the land, Chris and Cassandra have two other major investors on their team: Mark D and Chris F. Between the four of them, and any other investors that seek to join, they will be the stewards of the land. Chris explained that he would certainly welcome more investment, especially to fund infrastructure that will help develop an off-grid forest paradise. Among possible infrastructure plans are camping areas, a wood workshop, compost toilets and communal food-making space.


While Chris and Cassandra lay out the reasons for the campaign in their inspirational video very well indeed, I shall summarise the intentions of the campaign and land purchase as I understand them below:

Reforestation: This would involve the removal and productive use of invasive species presently on the land (wattle, blue gum and pine) and the reintroduction and conservation of indigenous species (such as yellowwood, stinkwood and wild fig - you can find a more complete list of indigenous afro-temperate tree species here). The Knysna area is especially famous for its Big Tree, an 880+-year-old yellowwood which is over 36 metres tall!

Productive Use of Invasive Species: Productive uses include ecological building techniques, including use of recycled materials, passive solar design, mulching, composting, and the construction of compost-toilets, furniture and beehives. As most of these uses require wood processing, construction of a wood workshop is a recommended early step.

In August of last year, Chris attended a wood-building course in Wilderness, South Africa, facilitated by Roy Trembath. This gave Chris experience in building with blue gum. He relates that he enjoys cutting, measuring and sawing, and that building with blue gum is relatively simple because you can build out of logs instead of having to cut the wood into planks. He also wants to find new uses for wattle (which is usually not considered strong enough to build a house out of, but can be used in secondary furnishings).

To build a Creative Retreat: While modern city life can sometimes be the catalyst for creativity and generativity, it can also happen that the pace and noise of the city can be overwhelming and a distraction from our creativity. Chris seeks to provide artists, painters, musicians, writers and others with a quieter, more distraction-free, yet ultimately fun space to bring their works into manifestation. Indeed, as Chris says, "Everyone is an artist - we've all just suppressed our creativity".

Chris first became an artist about five years ago. He relates how he soon discovered that artists have to draw from their own personal experience and actually share that experience with others - the better they can experience what that artist did, the better job the artist has done.

Today, Chris's approach to art is that, unless he is doing something for the good of the Earth and the people - in his words, unless he 'feels good as a human being, living a life he is proud of', eating healthily and freely giving of himself - he will not feel inspired to make art. Without this spirit of giving, he revealingly says that painting "[can be] quite a selfish, self-indulgent job".

This is something I can certainly echo - I know I feel most creatively inspired when I am generous with my time and money, and when I give love and care to others.

With the land as a retreat, Chris sees opportunities to read and write more, to draw more influences of surreal and dreamlike states into his art, and to share the space with others. He sees the built retreat as something to form part of the 'communal space' of the land rather than a private studio.

For those who come to the space, it can be used as a place to host informational workshops or for a band to play together. If artists volunteer from 9am to 1pm in the physical work required to set up the land, it may well result in them feeling energised and refreshed and ready to be creative! The inherent energy found in artisinal, hand-crafted design will add to the flow of the space.

With 'creative brains' coming into the space, the permacultural design and manifestation of the land will emerge from a multitude of perspectives. Chris sees his role as something of a 'lighthouse keeper', stewarding the land and connecting people who may have something to contribute. Overall, he wishes to experiment, 'colour outside of the lines', and simplify processes, with his understanding that "creativity is simplification". Chris says he wishes to 'embody the simple life we could all benefit from', cautioning us that there is always a price to be paid for luxury, such as in the number and embodied energy of materials used, or also in approaching the limit of the number of structures legally allowed to be built on land.

For Chris and his friends, this year (2017) is mostly going to be about assessing and surveying the land in order to understand it as a whole, and then planning and designing appropriately. Water collection, forestry and wood work are early priorities on the dream list, with a view to stay 'off the grid' wherever possible.


My own interest in Chris's land venture is my work towards establishing an eco-village in the Western Cape of South Africa. In my work as a web designer, project manager and secretary for the Eco-Village Collective, our group has often discussed crowdfunding as a potential option. However, I often thought that people would be reluctant to donate money into a project for 'someone else's land'. Chris showed me that I was totally wrong, and I was thrilled to be proven wrong so decisively. No more shall I underestimate the generosity of strangers towards supporting a beneficial cause!

There are many links between a creative art and reforestation retreat and a permacultural eco-village farm, and I look forward to collaborating with Chris and his team, as we have many wonderful ideas to share. I loved meeting Chris, Mark, Chris F and Alexandra and had a fantastic working holiday with them. After the passage of a few months, I look greatly forward to a return visit! Chris generously provided me with a half-hour long interview, which I am planning to make into a documentary - watch this space!

Finally, if  you have any ideas that you feel inspired to share with Chris, or if you have any connections with forestry people, borehole engineers, or municipal (Knysna) government links, e-mail him at chrisauret@live.com, or, even better, set up a visit with him!
Posted by David at 22:25