I arrived at the Findhorn Foundation's Cluny Hill Hotel today at around 11am.. and what a place it is!


But first, a little history, and self-examination.

I have long considered myself an introspective, introverted, sometimes shy person. I do not make friends easily (although when I do, I will stay loyal to them no matter what). I tend to find small talk awkward, and have some not inconsiderable resistance to some social rituals, especially those connected to spirituality and eating, when I'm not yet sure I want to participate, and am encouraged perhaps a little too readily by others - I need to pick up such things at my own pace.

One could be forgiven for wondering how this is connected to ecovillage creation.

At the New Year's festival called the Learning Man that I participated in over 2015/2016 at the Riviersonderend, Western Cape campsite 'Circle of Dreams',  there was a request for all people to participate in community events and community volunteering. The atmosphere was wonderful and inviting and the people were super friendly.

However, at this time in my life I was feeling particularly cynical over any sort of personal relationships, owing to a separation from my romantic partner around two weeks before then. I did not feel ready to give myself fully, nor to receive fully, what this event had to offer. For this I am sorry  - I know I broke the event guidelines by keeping to myself for a fair majority of the time I was there.

And it was at this point that I began to see what some of the problems present in any kind of group activity or  community. It is related to people's inherent 'animal' selfishness, and I, in possession of an unusually large load of avarice, am least inclined to give of myself, and receive, when I feel a sense of loss or disappointment in life.

Perhaps this is one reason why we can't just 'jump' into community, but have to transition into it. This is why we can't give up money, all at once, and rely entirely on word-of-mouth and trust for exchange of value. Because there will be times when I, and others, feel that our natural altruism is overshadowed by our avarice, our disappointment, our anxiety.

When you pay for something that you've bought, in money, and in full, you are ending your obligation to the other party.  There are times when I feel I need to be entirely free of any obligation to anyone else. Sometimes even for days or weeks on end. This is a reason I can say I'm not willing to give up using money entirely (although I would jump at the opportunity to rewrite every last inequitable 'law' of commerce currently applicable today - and most of the laws of commerce are indeed inequitable, designed to empower the already powerful and further disempower the downtrodden).

Towards the end of the Learning Man festival, I began to take notice of the unhelpful attitudes that I possess, regarding communality.
I had begun asking the question: Can this work? Is it possible for us to adopt a tribal, fully equitable model of community, value exchange, law and society? In which we are accountable to one another and to the Earth, yet still able to reserve participation at times when we do not feel ready?

I was far from willing to give up hope, but I had certainly hit upon one of the largest stumbling blocks. Most communities that are started (90%) fail and fall apart (as do roughly 90% of businesses, which are also communal ventures). And almost all of those 90% that fail, fail because of human reasons, not because of crop failure or building or technology. For an explanation of why this is so, and a method for doing better than those 90%, see Diana Leafe Christian's book 'Creating a Life Together'.

I mentioned some of these thoughts at the festival, and mentioned to a permaculture teacher, Buzz, that I was thinking about travelling to New Zealand for a permaculture course that I had applied for (and been accepted into).

He told me that New Zealand sounded great and very interesting, but that the Findhorn foundation was also hosting a course around this time, that was to last four weeks.

Knowing that Findhorn was in northern Scotland, during February and March, I knew it would be too cold to be asked to camp for accommodation there. And after the festival, which was a burning 43 degrees Celsisus on the hottest day there, and 38 degrees every other day, I was just about over camping for a lifetime.

And then, of course, Findhorn's reputation as one of the most respected ecological centres in the world, was no small attraction to wanting to attend.

So I registered for the Findhorn course, full of excitement, and spent the next month getting ready to travel. 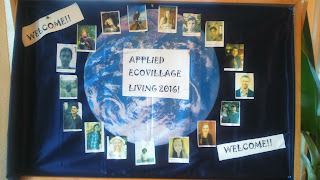 Last night in Forres, I stayed in a very charming B&B full of fairy lights, owned by a sound healer, Jill who patiently listened to all my misgivings and reservations about community, and anger over my delayed payment at the corporation I was working for back in Cape Town,  and reaffirmed for me that I had come to the right place. This is about a journey.

This morning, as I listened to the resonant hum of the crystal bowls and walked through the beautiful Sanquhar forest in Forres, I began to find the full measure of my faith again.